I am currently in the process of completely rewriting this application from scratch. The code for the old version was an absolute disaster, written nearly four years ago when I first started learning Python. The new version will be written in Python 3 and use PyQt5.

Unfortunately I don't have a timeline on this new version but a rough guess for an early release would be early July 2014. Eventually I hope to get an actual stable release ready for Ubuntu 14.10 (Utopic) in October. Windows builds will be released when time permits.

(I will also add a link to the project page on GitHub once I am a little bit further into this.) 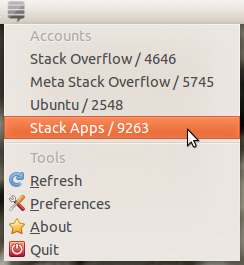 StackApplet is a small status icon that sits in your desktop's notification area and alerts you to events that happen to your accounts. You will receive notifications about new answers, comments and reputation changes. All Stack Exchange sites are supported. The application is written in Python and the preferences page uses JavaScript.

Packages are available for the latest stable release (1.5.2):

Windows XP/Vista/7/8 or a Linux distribution with PyGTK installed.

I can be reached at admin@quickmediasolutions.com.

Since you are already using a GUI toolkit (pygtk? haven't looked at the source), it doesn't make much sense to have your preferences as local website; if anything, it's a security risk.

Any chance that the Preferences feature will be rewritten with a proper GUI?

Does this work behind a proxy server?

I am trying to add my AskUbuntu Account, but the Preferences dialog just freezes after some time.

Please add support for proxies... It would be helpful to people behind proxies. Like myself.

Not sure if this is a bug on my end, but recently the application has been giving me network errors for Stack Overflow, Ask Ubuntu, and Raspberry Pi SE. I attempted reinstalling both via DEB and via the PPA, but it still was giving me errors.

So, I tried removing all of them, and then tried to add them back, but I get this: 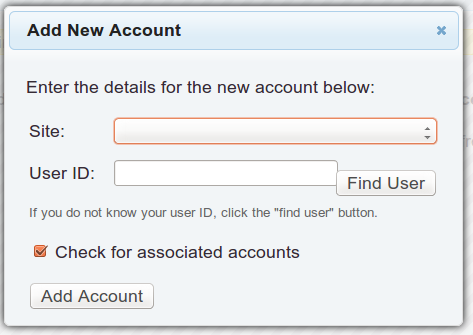 and there are no options under Site. Is this a bug somehow, or a result of an API change or the update? 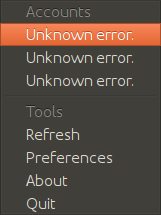 Any idea what could be causing this?

I get this error when I select the Preferences menu item on Ubuntu 14.04:

Invalid authorization credentials supplied. Please click on the preferences menu item in the application to view this page.

I reinstalled 1.5.2 and I have been getting this. All of the provided accounts from the previous installation are showing the correct rep, but I can't add new accounts.

I don't know what is the application normal behavior, but I'm only able to see my reputation on a lot of SE sites, while I don't receive any notification at all (such as when someone comments/replies to a question of mine). Is this normal? I'm on Ubuntu 14.04 x64 and I'm using the 1.5.2 version

After a long break (due to unsolved problems) I tried using this applet again today following the up-to-date installation procedures (basically using the latest PPA and remembering to check that python-appindicator is installed) but unfortunately this time I couldn't even start logging into my account no matter what I did -- entering my user name or my email address or using "Find User", etc.

I started the applet from terminal to see any error messages, but nothing was there to see either.

Not the answer you're looking for? Browse other questions tagged app notifier windows linux .

132
SENotifier, a Stack Exchange inbox notifier for Mac OS X
78
StackStalker: Be Notified When Your Question Is Updated (Chrome Extension)
6
Is there a Stack Exchange notification app for Windows 7?
12
What's the etiquette for answers/comments on an app “question” on stackapps.com?
4
How your app[s] is going?
9
StackWatcher: Watch Your StackExchange Accounts
6
Should feature-requests, for third party apps, be flagged as “not an answer”?
2
desktop alert with notificatons whenever a favourite tagged question will be asked
2
Better way to find activity changes in terms of API Usage
0
Is there an app to monitor reputation and new answers/comments?
See more linked questions