Stacktop is my Mac client for accessing most of the Stack Exchange sites.

Here are some screenshots of 3.0. Note the colors in the first screenshot change depending on which site you are "visiting": 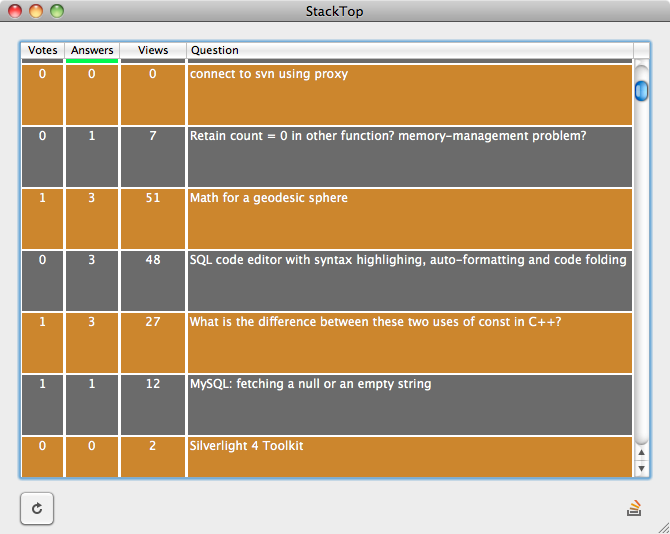 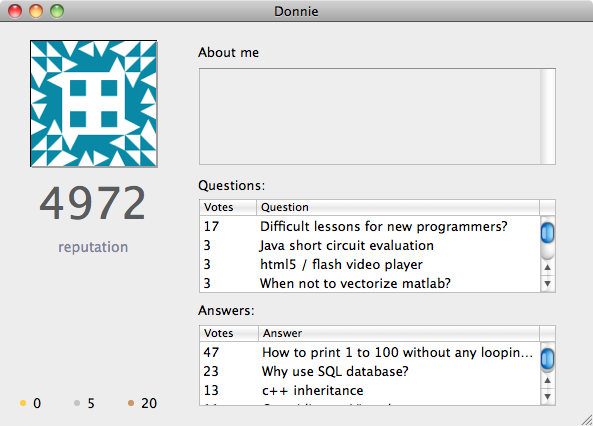 This application will at first be much like a twitter client, then eventually I hope to make it more like an auto-search app where you input keywords then every 10 minutes or so it'll search SO and tell you if there are any questions that haven't been answered that are about whatever your tags are. Hopefully this will allow SO users to gain more rep and kick Jon Skeet out of #1 (Love you Jon!!!)

This will be released for free.

You can download it here (Updated link with a version that actually works!!!)

This will be for Mac ONLY

This was written entirely in Objective-C with the help of my Library, MSOEngine

Version 2.9 has been released.

StackTop is now out of beta!!!

Contains all the features listed in the 3.0 section, MINUS comments. I figured comments wasn't a huge deal, so I left them out. Plus, I couldn't figure out a good way to integrate them

You can contact me at matt (at) mattsapps (dot) com

I'm very hard at work on StackTop 3.0, so far, here are the new features:

I will NOT be supporting other SE sites UNTIL they are out of beta. If you've ever used StackTop, then I'm sure you can imagine why. It really is a pretty big pain to get those colors in the table view (mainly the highlight colors), so I'm not doing it until the site is part of the SE network. Also, I will not be including the new metas for super user and server fault until there is a new site in the SE network.

14
Bartlett—new questions, inbox items, and reputation in OS X
3
How the apps-libraries will be judged for the contest?