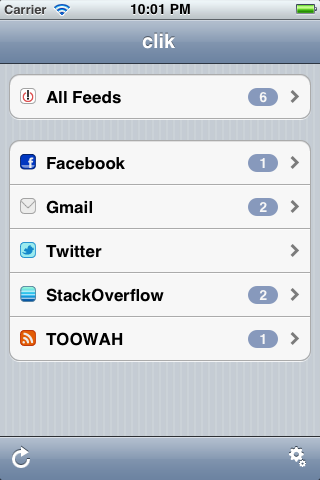 Your notifications are split between screens, apps, and sites. Put them all in one place, only a clik away!

clik removes the hassle of keeping track of your Facebook, Twitter, Email, Foursquare, LinkedIn, StackExchange, and RSS notifications. Any time something pops up, it’s sent directly to all of your cliked devices. Once you check it, it’s gone for good, so you never have to deal with it again.

clik is available on the iTunes and Mac App Stores, and the Android Marketplace. clik is presently available at no charge.

clik is available for: