StackTagz - Track the topics you are interested in over time 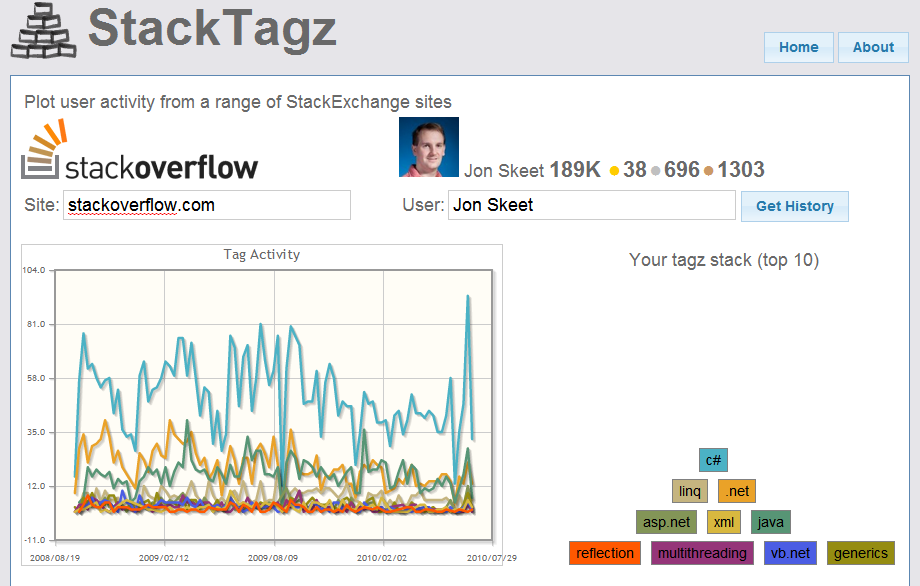 StackTagz analyses your participation in StackExchange sites by looking at which tags you are active in. A question, an answer or a comment is counted as an "interest" point in a tag. The results are rolled into weeks as this period was found to give the best overview of one's activity.

It uses a local database to cache API results fairly aggressively. Because it is assumed that once a question is out there, it's tags don't really change, it is possible to cache full timeseries and individual questions. The goal is to have the app not making a repeated call to the API ever.

Version 1.0. Future revisions will include better feedback about the progress of the graph request and turning individual timeseries on and off.

Contact me at izevaka@gmail.com if you have any queries or suggestions. I am planing to set up a blog and a twitter account for this site, so stay tuned.

The app is written in ASP .NET MVC2 and uses a whole bunch of awesome libraries like Stacky, jQuery, jqPlot, jQuery UI, blockUI, MS Entity Framework, jQuery Address and a few others.

At this stage the code is closed source as it is a public website that requests makes A LOT of API calls. Once I am confident that it's fairly secure, I am planning to open source it.

Of course, I will provide source code upon request if it so happens the app is considered for the API Contest :)

Update (2010-07-06) User search is now performed using the api server directly, instead ofusing the stacktagz server, which in turned queried the API. Suggested users should come up much quicker now.

Update (2010-07-08) Fixed tooltips not being shown or shown incorrectly for some points on the graph. Added site links for user graphs.

Just as I am writing this and getting graphs for above users, the results are fascinating. People's interests are absolutely fascinating!!! Compare cletus (who is into everything) and Alex Martelli (die hard pythonista). Or that shog9 is really Jeff Atwood's alter ego (look at the pattern in the first year). Or that Jon Skeet gradually lost interest in Meta (tut tut Jon :D ).

I am thrilled to see this kind of data side by side.

119
Stacky - A .NET client library (Full support for API v2.0)
12
API V2 Musings: What would you like to see
18
OBSOLETE - Stack Insight - Track a User's Activity Over all Stack Sites

125
StackPrinter: The Stack Exchange Printer Suite
13
analyticsoverflow - tracking question and answer counts over time
18
OBSOLETE - SOAPI-WATCH: A realtime service that notifies subscribers via Twitter when the API changes in any way
18
OBSOLETE - Stack Insight - Track a User's Activity Over all Stack Sites
19
OBSOLETE - StackCenter - your one-stop app for everything Stack Exchange
5
Stack-Trac - List stackoverflow/serverfault/... questions that are related to your Trac tickets
148
StinkingBadges - Track your progress towards long-term badges