OBSOLETE - A Stack of Twits - Tweeting all over your stack

Get tweets about new questions on Stack App sites 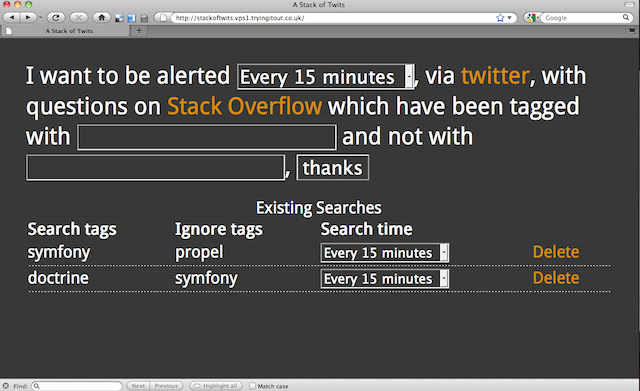 I am fed up sitting all day refreshing the home page waiting for that elusive question on symfony that I can answer and who uses RSS these days? So using tags and massive fonts you can now get a tweet with a link the the question title in your update stream. It uses twitter oAuth and makes friends with http://twitter.com/stackoftwits. You will get @updates from @stackappbot. You don't want to follow that account really as if your friends all follow stackappbot you will see a lot of stackappbot posts in your stream! I didn't like the idea of using DMs as this usually generates an email which could also get annoying.

As more sites come out of private beta they will be added.

Thanks to my employer I now have a proper domain. http://stackoftwits.com/ (offline now)

I've built this using symfony but the I have been trying to make the StackApp api code non-library dependent. I do plan on releasing the code that handles this once I've tarted it up.

Email me (my username at gmail)
Tweet me @johnwards

Adding the ability to search the other 2 sites in the trilogy. Now a feature, also editing the site that searches run on
Add question ids and get tweets when answers/comments are posted.
Sleep mode. No messages during a set period. Now a feature
Bug fixed due to tag searching being an OR search rather than the expected AND, see here
Now working with API 1.0 thanks to my PHP wrapper which will be released once I've finished it, I've only implemented the parts I need so far.

I just have a few questions:

Also, you should apply for whitelisting on Twitter if you get a lot of users. They don't like it if it looks like you're possibly spamming people.

4
AND searching for tags?
3
How the apps-libraries will be judged for the contest?