Stackathlon 2.5: Leader board for users active on multiple sites 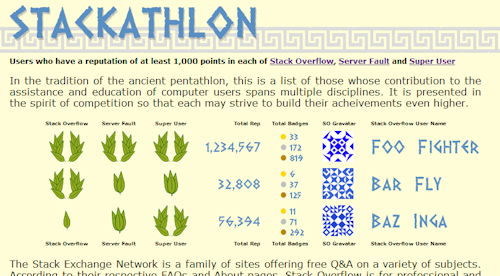 It's surprising how few people are active on multiple Stack Exchange sites. Well, maybe not so surprising. But it's a big world; you'd think there'd be more. When I first created Stackathlon, there were 21 people on the list of users with 1,000 or more points on all three of the original trilogy sites (Stack Overflow, Server Fault and Super User). Now, almost four years later, there are still only 132. Other site combinations (more on this below) have even shorter lists.

In any case, Stackathlon is intended to foster a little friendly, fun competition. Perhaps while wearing a little more clothing than the ancient pentathletes did. But who cares just as long as my web cam is turned off?

The icons indicate the level of reputation points achieved in each site. A laurel wreath means at least 10,000 points. Three, two and one leaves represent the 3,000, 2,000 and 1,000 point levels. The list is sorted by the levels, nearness to moving to the next level and then by total rep points.

The code is closed license for the time being for the safety of the general public.

You can see the most recent update of the leaders at stackathlon.com

Stackathlon is a product of Dennis Williamson. I take full responsibility for any unpleasant aftertaste. I can be reached at [my first name] [that circled a] [netstrata] [dot] [oh, what's that last part? oh, yeah, "com"].

The app is written in Python using only standard libraries. The original code was very delicate and rough. Like broken porcelain, but without the pretty pattern. It caused the CPU* to emit a noise not unlike fingernails on a chalkboard. Code is Poetry. Some code is Vogon poetry. But in this version, it's well organized and maintainable Vogon poetry - which means that features are easy to add <shriek!>.

* No, really, I do mean the actual chip.

The graphics were done by me using Inkscape and Corel Paint Shop Pro. The Greek-looking font is Dalek.

Yes, I know there's a typo in the screen shot. It's part of its charm, don't you think?

Stackathlon now supports other groupings in addition to the original trilogy. The first two new ones are Gaming Geeks (Arqade, Role-Playing Games, Science Fiction & Fantasy) which was suggested by Pureferret in a comment below and the first pentathlon, Super Programmers (Stack Overflow, Programmers, Computer Science, Theoretical Computer Science, Code Review).

I won't be able to do arbitrary combinations chosen by site visitors because too much data needs to be retrieved and that would cause the API police to knock down my door in the wee hours.

Please suggest additional combinations in comments or "answers" below. The component sites must fit a theme and must have at least one eligible participant (I can check that).

I'd like to thank Stack Exchange for their assistance.

Great design and great idea. I don't know whether many people still look at this, but I discovered it today and if it was advertized and used more.

23
Google App Engine [app]s - We are all on the same quota!
2
Query Statistics for my app responds with "No Requests"