This is a suggestion to create one, possibly two, indicators relating to Reopen Review Queue status. The purpose is to alert users to the requirement for intervention outside the normal process to get a question reopened.

The design of the Reopen Review queue and the nature of Super User create a situation where it is easy for closed questions to fail reopening in the review queue, even though they have been improved into good questions. When a question fails to be reopened in the review queue, there is no system mechanism for it to collect reopen votes, regardless of further action on the question. External intervention is required to reopen the question.

However, the fact that the question was in the review queue at all, or that it failed, is invisible to users on the question, itself. Question activity can be easily misinterpreted to assume that there is an active reopening process underway when there is not. Reopen activity just appears to stall for no apparent reason. If someone following the question investigates the history, they can discover that it failed the reopen review. But again, it is easy to misinterpret the reported activity as the will of the community, when it is not. Users unaware of the review or its failure, may edit the question or vote to reopen thinking those activities will get the question into review when they will not.

The result is that questions worthy of reopening are left sitting idle, with nobody aware that reopen votes are needed, and existing reopen votes aging away. The questions don't get reopened, and people assume that was the community's decision. In fact, intervention was required and nobody was aware of it.

Details of the underlying process, and how and why this happens, are described below as supplemental reading.

The objective here is to create status indicators to make users aware of the situation and the need for intervention.

This is out of my area, but I'm going on the assumption that at least the detail for the first indicator below is available in the API because I assume it is used to create the question timeline. Here's the timeline for a recent example (Continuous Number Generator), that got reopened by recruiting votes in a Meta site post after I discovered that the action was necessary: 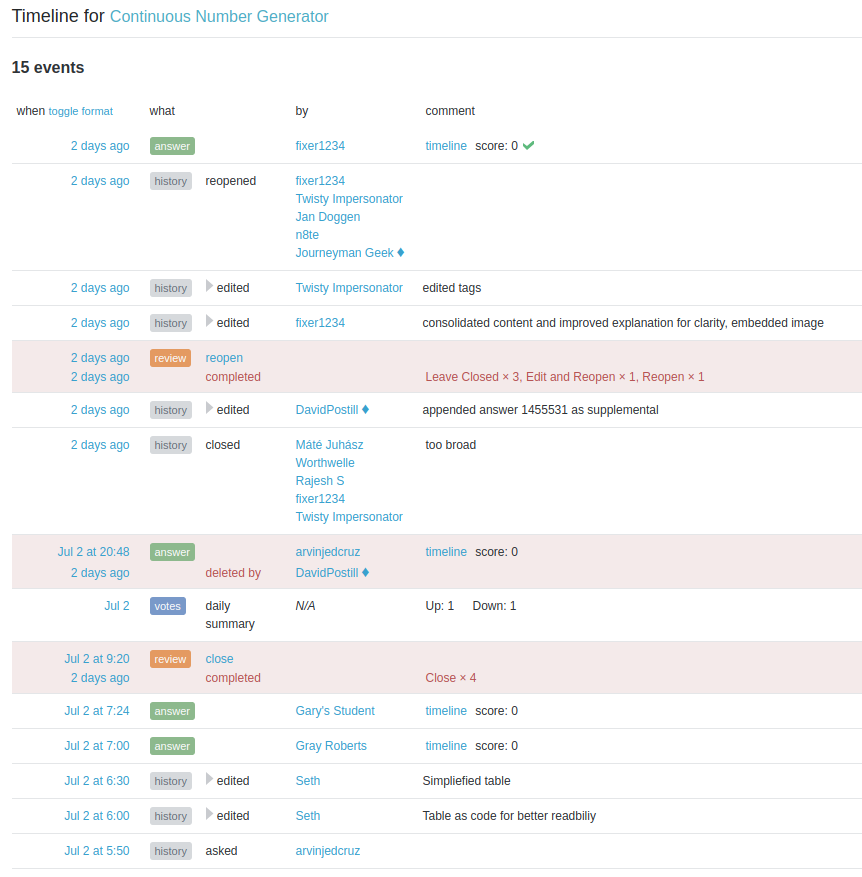 Around a third of the way down from the top, it shows Reopen Review completed (2 day marker). For the second indicator below, the voting, editing, etc. is summarized along with date information, so I'm assuming the detail behind the summary might be available.

What the app or feature would do

There are two levels of functionality that could be useful.

NOTE: Reopen review has been completed. This question will not appear in the Reopen Review queue again. If you believe it should be reopened, please use other means to have it reconsidered.

Timing prevented reopening in the review queue,
no additional reopen votes will come from there.
See note in the Closed message.

Site Applicability: This could potentially be useful on a number of sites, but I suspect it is most applicable to Super User because of the nature and size of the site.

A substantial portion of the technical questions SU receives are from non-technical users. The questions are answerable only with accurate, complete detail that non-technical users don't know to provide, or how to provide. For many posters, English is a second language, and technical descriptions are ambiguous. Getting a question into good, answerable form often requires repeated attempts at clarification and editing.

What happens and why: (Simplified explanation of a complicated process.) Questions that are unanswerable as-is get closed. It takes multiple rounds of clarification and editing to turn it into a good question that can be reopened.

Often, the edit that triggered the review queue doesn't turn it into a good question, a later edit does. The early reviewers vote to leave the still-inadequate question closed. If the question is still in the review queue when it becomes good, reviewers start voting to reopen.

Editing continues independent of any reviewing, and at some point, it becomes a good question. Independent of the review queue, the editor may vote to reopen. A few people who are actively following the question may see the improved question and vote to reopen on the question, itself. So soon after improvement, it collects some number of reopen votes from various sources.

On the question, there's no indication of the review status, or even that it is in the queue. People make assumptions based on visible activity. What anyone with an interest in the question sees is easily misinterpreted: the question was turned into a good one, and then started receiving reopen votes. They assume the last edit bumped it into the queue, and those reopen votes are activity in the queue.

It looks like appropriate momentum, and reopening is expected. However, for no apparent reason, reopening just stalls; those initial reopen votes are the only ones that show up. People assume there's an active process underway to finish reopening the question, when there isn't.

Questions get only one shot at the reopen review queue. So when it fails in the queue, it becomes invisible. Nobody is aware that that they need to vote to reopen it. By this time, the question is no longer fresh, so there is only a trickle of people with voting privileges, who have not already voted, who might stumble across the question.

To make matters worse, if someone gets curious and checks the question timeline, it looks like it went through reopen review and it was the will of the community to leave it closed. The timeline information doesn't reliably indicate when the edit happened in relation to the individual votes. This perception may discourage even pursuing getting it reopened.

If this was a feature of the SE UI, a lot of users might benefit from it on their own questions on rare occasions (users tend not to stick around if they post a lot of bad questions). As an app or script, the typical user probably won't have much need or incentive for this. I anticipate it would be of interest mainly to two groups of users who would run into this situation with any frequency:

Currently only the pending/completed review warning is there. I might add the other bit (notice under the reopen?) later, but it looks to be more complicated.

Feel free to raise any issues or pull requests on the GitHub project, or comment here.

2
Looking for app to support offline access to my posts?
12
Add close-vote information to the questions object
6
Should feature-requests, for third party apps, be flagged as "not an answer"?
21
Close Reason Editor: Customize your off-topic close reasons
3
How to track the open/closed status over the history of a question?
1
Is my script's API usage okay?