This is a data dump importer written in C# that works with current versions of the data dump. It's written using Winforms, NET 4.5 and only supports SQL/Server so if you want to import a full Stack Overflow dump you'll need a full version of SQL/Server rather than the Express edition due to the 10GB limit.

I imported the full Electrical Engineering dump into an Express instance in under ten minutes. I'm still waiting for the full SO dump to download to try it but don't expect any problems although the import will likely take hours to complete because I've kept the code short rather than efficient. 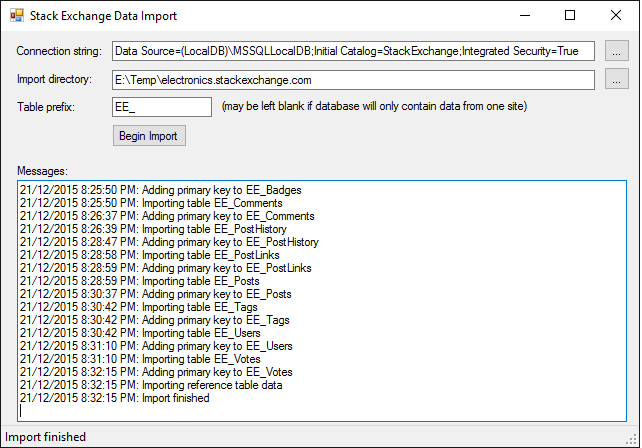 How to use it and what it does:

Once you press the begin import button the following operations will take place:

To build the source you will need the following:

If you don't want to build from source the bin\debug directory contains the executables and DLLs that should be enough to run it as long as you have .NET 4.5 installed. Feel free to do whatever you like with the source, I suspect it wouldn't be too hard to get it working with MySQL for anyone interested in doing that. The files may be downloaded as a zip from:

22
StackUsers.com - everything you ever wanted to know but were afraid to ask. (about an SE user. almost.)
39
Fast Multi Platform Data Dump Import for SQL Server (2000/2005/2008), SQLite and MySQL
1
stack overflow data dump utility error - mysql