Each time an API request is made over HTTPS, Firefox generates the following message in the error console:

Curious, I looked up RFC 5746 and the document covers the following:

Secure Socket Layer (SSL) and Transport Layer Security (TLS) renegotiation are vulnerable to an attack in which the attacker forms a TLS connection with the target server, injects content of his choice, and then splices in a new TLS connection from a client. The server treats the client's initial TLS handshake as a renegotiation and thus believes that the initial data transmitted by the attacker is from the same entity as the subsequent client data. This specification defines a TLS extension to cryptographically tie renegotiations to the TLS connections they are being performed over, thus preventing this attack.

I realize that this probably isn't a terribly serious problem, but it does appear to be a bit of a security concern. Is there any chance this could be fixed?

Edit: not sure if it's related, but it gets worse: 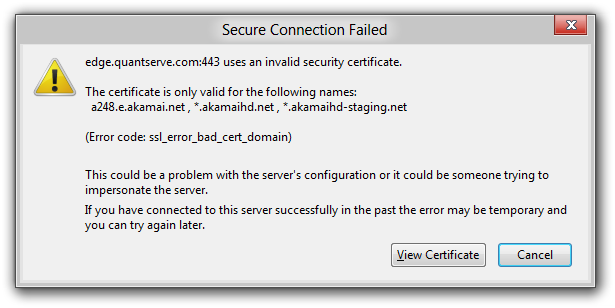 I get this dialog box in Firefox 9.1 if I attempt to authenticate an app using the implicit flow.

This is both status-completed and status-planned, really.

The offending material was excised a while ago, so that warning shouldn't be displayed ever.

The RFC 5746 message will go away when we next do an upgrade on our SSL load balancer... which is planned, but not going to happen over night either.

2
Oddity with migration data from questions
6
Increase the pagesize limit from 100
1
API is accepting requests from other OAuth domains
2
question_id missing from migration_info for this question.
2
link attribute is missing from questions in /tags/{tags}/faq
1
Running queries from the Documentation pages hangs browser for minutes at a time
0
Security certificate error when logging in with myOpenID
1
Question count missing from network_user
3
Why is "body" missing from certain inbox items?
5
Typos on api.stackexchange.com/docs/js-lib