Heat detector is a StackApp whose goal is to catch offensive, rude, snarky comments, and comments that leads to abusive content (offensive, spam posts, or previous offensive comments). It is running a bot that queries comments from the Stack Exchange API and retrieves all comments posted on Stack Overflow.

The automatic detection is based on a mix of regular expressions and NLP (Natural Language Processing). When a comment is classified as "rude" by the system, it is sent in a dedicated chat room for manual review and feedback.

To avoid storing comments in chat transcript (unearth buried fights), the comment is automatically deleted from chat before the timeout (which is a 2 minute window).

The bot also has a test function and a report function, that enables the possibility to test different comments and to train the classifiers on uncaught content.

The comments API is queried every 1.5 to 3 minutes depending on the traffic, the objective being to get all last comments within 1 page result (max 100 comments), to reduce API calls to a minimum.

All comments are processed both by RegEx and machine learning algorithms (NLP) and they all contributes to a final score. If the score is above a defined threshold then the comment is send to chat.

Before applying a RegEx detection, the comment is pre-processed, removing usernames, HTML tags, and repetitive characters. In the same way, before NLP classification, code blocks, links, and non normal ASCII characters are removed.

Currently 2 different NLP systems are used. On the basis of the predicated value the score is increased.

The classifier has a feed divided in 2 categories, the good feed that is a download of old (>90 days) comments from the comment API and a bad feed that is a composition of:

The classifier runs with these primary settings: 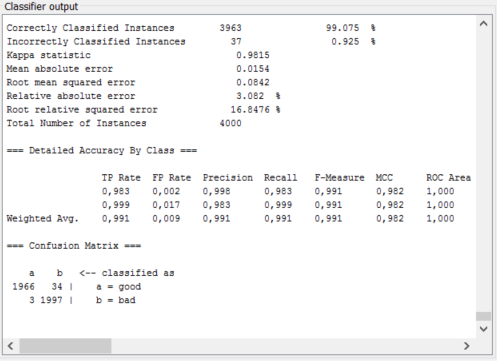 Testing on training set has correctly classified instances at 99.823%, with 7 comments out of 4000 not classified correctly.

Other classifiers as J48, SMO, and SGDText have been tested, but didn't provide good enough results.

The bot runs under the user Queen, which is the same as SOCVFinder. The main reason for this is to leverage calls to the comments API, since SOCVFinder is already querying it to fetch possible duplicates. The bot is present in the SOBotics chat room.

Source code is available on GitHub.