OBSOLETE - SOREP: Trilogy Site Ranking - For those who need to know

Note, all of the app links, below, are dead. And the domain is parked.

SOREP is a service that does a nightly index of all users ordered by reputation and makes that information available via REST.

The primary use of this information is to add a top xx% to your flair. See examples below. The top xx% has a mouseover that indicates your acutal ranking, e.g. 392 out of 148,200.

This service has been running for some months using screen scraping but upon creation of SOAPI-CS I figured I would dogfood it on my own stuff.

I am pleased to say that not only is using the API (and SOAPI-CS) much faster, it also reduced the complexity of the code by orders of magnitude. I am pleased.

I see a few questions on meta.stackoverflow.com regarding user ranking. There are several existing lists but they are focused primarily on users with higher scores.

So, I wrote a small applet that, via a trickle pull, indexes all users for the trilogy and meta down to the 100 rep mark, in order of appearance.

The 100 rep cutoff seems reasonable. On StackOverflow, the vast majority of users are < 100 and pulling that data seems over the top frivolous.

An example of using ranking in Flair is available on the interactive page. 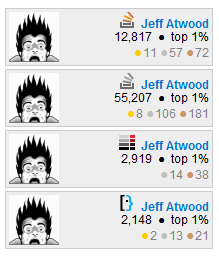 I see that the only reason you didn't include Jeff's StackApps score is because I have the top spot!

Jokes aside, that is awesome and I can't wait to play with it further.