Other that invalidating an access token doesn't remove the app from the apps tab (why not?) whats the difference between these two methods?

I'm going to lay some ground work about authentication and access tokens before answering, because I think you have some misconceptions.

When a user authenticates an application they have given permission for it to access their data in certain ways (via scope). The actual mechanism* for accessing this data is an access token, but the authorization to get it is independent of the tokens.

Significantly, just because an application doesn't have any valid access tokens (for instance, they all could have expired) that does not mean the application is not authorized to access a user's data. Practically, this means that when the application next puts the user through a OAuth flow they will not be prompted to Accept/Reject the app; a new access token will just be given to them.

This is why invalidating a single access token doesn't remove the application from the apps tab, the application is still authorized. Additionally, an application can have multiple valid access_tokens for the same user.

To draw parallel's with another OAuth 2.0 implementation; Facebook's App Settings page behaves similarly. The Stack Exchange app used for login doesn't request perpetual access nor does it refresh access tokens, yet the app stays in the list long after all created access tokens must have expired. 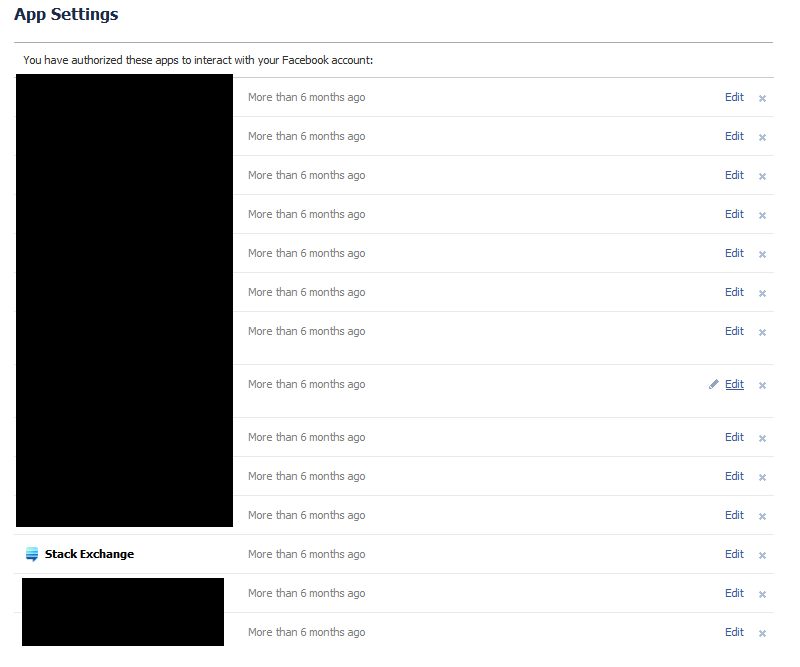 So the distinction between these methods is:

Some use cases for /auth-tokens/{tokens}/invalidate:

The use case of /apps/{tokens}/de-authenticate is primarily allowing applications to implement uninstallation as part of the application. Without this method, developers would have to instruct users on how to reach the app tab and manually remove their apps. That'd be both bad UX, and rather brittle as any tweaks we made to the app tab would risk invalidating those instructions.

Not the answer you're looking for? Browse other questions tagged support api-v2 .

1
Locked vs Closed
0
Removing/disallowing app does nothing
4
Access token quota
5
Access token keeps being invalidated
2
Implicit OAuth flow puts the access token in the hash?
1
Can I pass a filter to a write method?