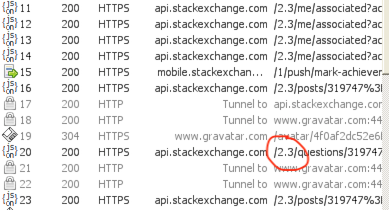 I noticed here that it has some extra functions compared to the current release (v2.2), and that it wasn't documented yet. However, that answer is one-and-a-half year old; any updates on this topic? Or will this keep on being an unofficial release, only released to support some additional features for the mobile app, which as we know isn't actively developed anymore?

I could have sworn that one of the SE guys said they weren't going to document it, but can't find a reference for that.

There's no timeline yet for new features (and API backing them), just focused getting the app working. Still, there are some smaller changes like submitting suggested edits, tag preferences, and can_ fields ready for (API) 2.3 when I get the app shipped.

Given that that was before API devs got switched to "Developer Affinity & Growth" (DAG), per the answer you linked, it may be a while before we can see anything official on the next API release...

14
Get favorited tags of user
4
What is the latest version of the Stack Exchange API?
10
Official Stack Overflow iOS App
2
API to submit a Suggested Edit
2
How are API changes announced?

4
Document fields that may be not be included in responses
2
Auto discover API version?
4
AND searching for tags?
30
Announcing API version 1.1 and Roadmap
5
Please make the site search on the API alphabetical