I created this small app as a weekend hack. It shows the reputations, upvotes, downvotes and accepted answers for a user against the tags for the answers. 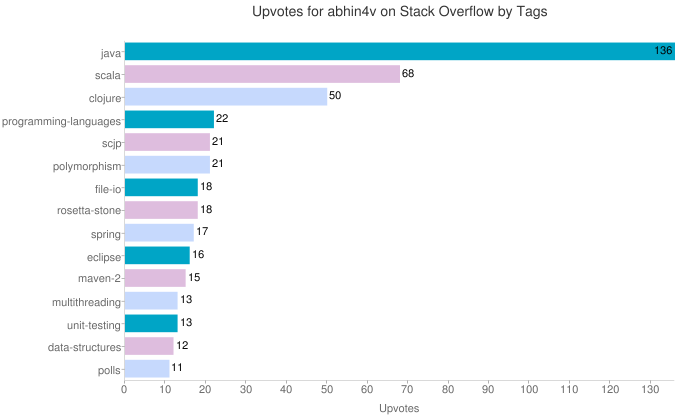 I wanted to know how may upvotes I was away from getting the bronze badge for the clojure tag. But I could not find any straightforward way of doing that. So I wrote this app (in Clojure, of course).

The SO API is used for the data and the charts are created using the Google Chart API. The charts are opened in the default browser.

If you have Clojure and Leiningen installed, you can simply get the code from https://gist.github.com/725331, save it as socharts.clj and then run

for launching the Swing UI 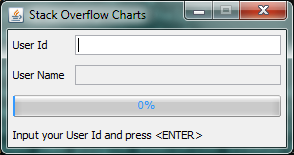 If you don't have Clojure installed, but have Java then download the standalone jar from http://dl.dropbox.com/u/5247/socharts-1.0.0-standalone.jar and run it as

Once the UI is launched, just type your user id in the input box and press <ENTER>. It will take some time to download the data from the SO API (the progress bar shows the download progress) and then it will open the charts in your default browser.

where you replace <userid> with your user id.

Be warned that because of a missing feature in the SO API, it will fetch the data for each question you have answered. So the maximum limit is 10000 answers (the SO API call limit).

All platforms with Java 1.6.

You can reach me at abhinav [at] abhinavsarkar [dot] net. Please report bugs/comments/suggestions as answers to this post.

Code was written in Clojure with the UI in Swing. It is available at https://gist.github.com/725331. It's a public gist so your can fork it if you like to do some changes.